If you're looking for inspiration, you should have been at the 3rd Annual Bob Chase Frostbite Sled Hockey Championship and the Inaugural Silver Stick International Sled Final at the Canlan Ice Sports Center in Fort Wayne, Indiana.  Sled hockey is designed for persons with disabilities.
On February 12 and 13th, 11 sled hockey teams from Buffalo, Johnstown, Pittsburgh, Columbus, Cleveland, Cincinnati, Detroit, Grand Rapids and Chicago, as well as the home team, the Turnstone Flyers, competed in the 3rd Annual Bob Chase Frostbite Sled Hockey Championship.  This event is the only sled hockey tournament held in Indiana.  The tournament is sanctioned by Fort Wayne Youth Hockey.  It has combined two first time events: International Silver Stick Sled Hockey Finals and the Inaugural MAGL (Mid-American/Great Lakes) Sled Hockey League Games.

1st Annual International Silver Stick Sled Hockey Final:
Silver Stick is a youth organization that promotes citizenship and goodwill through the sport of hockey.  Teams are from both the US and Canada. This is an inaugural event for the Silver Stick organization and another great step to promote the sport of sled hockey.   As such, the tournament plans to do its best to make this a very special “First” event.   Youth players received participant pins, and awards were handed out to the winner and runner up.   In addition, the winner will get the first ever championship trophy and banner for a Silver Stick Sled Event. 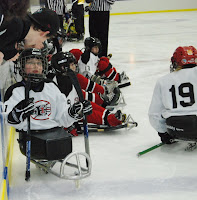 MAGL is the 4th Intermediate level sled hockey league to be created in the USA. This April for the 1st time the top two teams from all four leagues will qualify to compete for the National Championships at the Disabled Festival.

Admission to the tournament was FREE.
More information about the Bob Chase Frostbite Sled Hockey Championship can be found at www.fwyh.org or contact Chuck Reddinger, Tournament Director at 260-615-4652 or fortwaynesled@gmail.com, or check back here in late January 2012 for information on the schedule for the second annual event.

Click here to learn more about Turnstone, volunteer or donate.
Posted by Blog Administrator at 6:25 PM