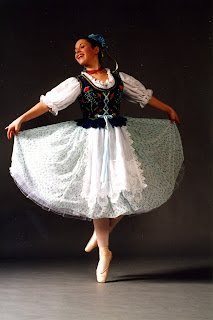 Coppélia, the comic ballet about “the girl with the enamel eyes,” is based on a tale by E.T.A. Hoffmann and provides a whimsical showcase for the talents of Fort Wayne Ballet in its spring collaboration with the Fort Wayne Philharmonic. With a romantic triangle, a mysterious toy maker, a life-size doll, and a spirited village girl named Swanhilda, Coppélia has been delighting audiences since it first premiered at the Paris Opera in 1870.

Hoffman, who also brought the original story of The Nutcracker to life, originally wrote a darker, more tragic ending to the story of Coppélia, making the character of Dr. Coppélius more sinister. But, seeing the need for a “happily ever after” finale, a third act allowed for a final, joyful wedding scene and features scenes from a peasant life, including “Valse des Heures” (“Waltz of the Hours”).  The relationships at the heart of the story are also more light-hearted, with the betrothed Franz inexplicably falling in love with a girl from afar, unaware that she is a creation of the lonely doctor. His beloved, Swanhilda, becomes aware of the confusion and what follows is both a charming tale and a coming of age for the story’s heroine.

“Coppélia is a fun, lively ballet and has all the elements of a great story,” says Karen Gibbons-Brown, Artistic/Executive Director of Fort Wayne Ballet. “A love triangle, a tale of good vs. evil, and an ultimate message of hope and joy. There are a lot of great parts for dancers, especially Swanhilda who matures into a young woman during the course of the story. The part requires a lot of the dancer.  When I performed the role I went through three pairs of pointe shoes at each performance.”

Coppélia was last performed by Fort Wayne Ballet in 2004, and its continued popularity is demonstrated by how frequently it is performed around the world each season. The Léo Delibes score is but one reason why the ballet has endured for more than a century, a fact which is ironic in itself.

“Delibes was a master of ballet works, and he had written the score for Sylvia, which was very popular at the time,” says Ms. Gibbons-Brown. “He hoped to write a score as well-known and as well-hummed as Sylvia, and of course Coppélia is now the far better known of the two.”

The matinee performances on Saturday, March 19 and Sunday, March 20 will be followed by Toy Shop Parties, an opportunity for the young and young-at-heart to meet the dancers and enjoy some treats and a gift bag. An Opening Night Champagne Reception, catered by Club Soda, will follow the March 18 performance.  All post-performance events take place at the Ian Rolland Gallery at Arts United Center.

Madeline features the popular heroine of Ludwig Bemelmans’ series of children’s books. Performances run approximately 35 minutes and are followed by an interactive party with the characters. Guests can have their photos taken with the cast, autographs and a special treat. The Fort Wayne Ballet Family Series provides an excellent entrée into dance for audiences of all ages. Families are invited to bring blankets and sit informally while the fun of Paris begins right before their eyes!  The Fort Wayne Ballet Family Series is sponsored by WAJI Magic 95.1 Radio.

For more information, please contact Fort Wayne Ballet at 260-484-9646 or visit their website at www.fortwayneballet.org.
Posted by Blog Administrator at 10:13 AM