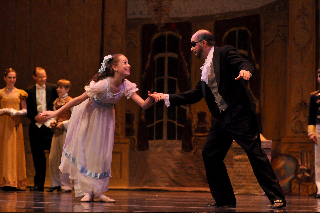 New this year is a joyous holiday event to celebrate the opening of The Nutcracker on Friday, November 30. The Nutcracker Act III will begin immediately after the performance at approximately 9 pm at the Auer Center for Arts & Culture at 300 E. Main Street, home of Fort Wayne Ballet’s studios and directly across the street from the Arts United Performing Center. The event will include heavy hors d’oeuvres, cash bar and dancing with the Paradise Band, as well as a chance to purchase one of four exclusive hand-crafted Nutcracker ornaments. Tickets are $75 per person and can be purchased by calling 260-484-9646. Proceeds benefit In-Theatre Education performances for area school children and individuals from Easter Seals ARC of Northeast Indiana. Thank you to our generous sponsors, Steel Dynamics and Wayne Metals.


Also providing a cause for celebration has been the success of Fort Wayne Ballet’s collaboration with Fort Wayne Animal Care & Control for the past two seasons. Fort Wayne Ballet has seamlessly incorporated adoption-eligible dogs in the Act I Party Scene, providing space in the lobby for FWACC to allow visits with the canine stars during intermission. Families interested in adoption can begin the process right there, but people were also encouraged to visit the wide array of other adoptable pets at the shelter located on Hillegas Road. Allison Miller, Adoption Supervisor of FWACC, has reported increased foot traffic in the wake of The Nutcracker, and, most happily, all 28 of the dogs featured during the 2010 and 2011 runs ofThe Nutcracker found new homes in time for the holidays.

Last year Karen Gibbons-Brown, Executive/Artistic Director of Fort Wayne Ballet, began contacting other ballet companies throughout the country in an effort to expand the project nationally, a project she hopes to continue in the years to come. Among those who signed on was Charleston Ballet Theatre who partnered with Charleston Animal Society to present “Muttcrackers” of their own for adoption. Ms. Gibbons-Brown has met with Richmond Ballet and has provided a website for companies everywhere to view to learn more about the process. MuttcrackerX10 (http://muttcrackerx10.wordpress.com/) provides background for others to follow Fort Wayne Ballet’s lead, including the perspective of both the ballet company and the animal shelter. Additional companies to cast their own “Muttcrackers” include Ballet Etudes and Carolina Ballet.

“We’re excited that other dance companies have begun to incorporate this into their own Nutcracker productions,” she says. “Our hope is that this project expands nationally, and I’ve been more than happy to share our experiences and successes with directors around the country.”

The 2012 production will also mark the final year for some of the iconic set design and scenery used for many years. With plans underway to replace pieces which are beginning to show wear, meetings have already begun regarding 2013 staging of The Nutcracker. Ms. Gibbons-Brown is already eagerly anticipating what she calls “a total makeover for next year” and continues in her quest to maintain not only the high professional standards of the performances but keep the costumes (designed by Tess Heet) and stage décor fresh and inviting.

In 2001, the Wall Street Journal recognized Fort Wayne Ballet’s production of The Nutcracker as one of the top five performances in the United States.

For more information about The Nutcracker performance visit http://www.fortwayneballet.org/nutcracker.htm

Posted by Christina Gulbrandsen at 6:37 PM