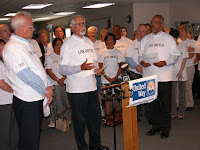 United Way of Allen County leaders gathered in downtown Fort Wayne at an Early Childhood Alliance facility to challenge the community to increase giving to a level that would bring the organization’s fundraising in line with the state average. At a news conference and tour of several Agency Partners, volunteer Campaign Chair Steve Smith announced the goal of $5,339,823. This is approximately nine percent greater than what the community pledged during the 2010-11 campaign, which totaled $4.9 million.
“Allen County’s per capita giving is currently $13.79, but the average for all Indiana communities with United Ways is $15.03,” said Steve Smith, general manager and CEO of Allied Health Physicians and United Way’s campaign chair. “Residents in similar Indiana communities are inspired to support their United Ways at a higher level, and I know we can do at least the same here in Allen County.” 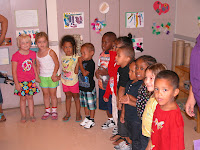 Donations to United Way of Allen County support more than 60 local social service programs and initiatives and 34 local partner agencies. Funded services fall into three categories: Basic Needs, Success in School and Family Stability. The services are provided for people in need and include everything from child care to health care, from counseling to scouting, and from literacy instruction to shelter for the homeless. The funds are allocated by volunteers who carefully examine each program and its results. 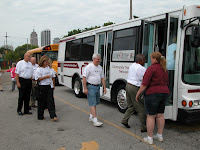 Smith and Stephenson were joined by dozens of United Way volunteers and representatives of partner agencies. The group visited the Early Childhood Alliance, Vincent Village and the 2-1-1 Call Center. Participants were transported in Community Transportation Network vehicles.
“The tour demonstrates how United Way works throughout the community, not in just one service area,” said Stephenson. “United Way supports programs that help people get through an immediate crisis, such as homelessness, and also funds programming, such as preparation for the GED, that assists people in becoming self-sufficient. In this way, United Way improves life for all local residents by building a stronger Allen County.”
“Over the past few years, we’ve been steadily increasing the number of our Ambassadors,” said Chris Rouse, resource development director for United Way. “Thanks to Steve Smith and our Campaign Cabinet, we’ve increased our numbers from about 30 to approximately 130 Ambassadors who visit local business leaders to encourage support for United Way of Allen County. I’m confident these motivated volunteers will help us spread the word about the importance of United Way.”
Anyone wanting to contribute to United Way’s Campaign can give online at www.UnitedWayAllenCounty.org or call 260.422.4776 and ask for the staff accountant.
Posted by Blog Administrator at 12:52 PM

"ENJOY AN EVENING OF FINE ART, FOOD, AND FRIENDS" at the Fort Wayne Museum of Art Trolley Tour 2011!

Travel between area galleries aboard the trolleys while stopping to sample complimentary hors d'oeuvres from outstanding Fort Wayne restaurants & caterers and see and/or purchase great art.

Purchase tickets at the Fort Wayne Museum of Art Store or the Orchard Gallery.
Posted by Blog Administrator at 1:16 AM

Click here and check out SocialFortWayne.org's Facebook page for more great photos from the 2011 Taste of the Arts Fort Wayne festival in downtown Fort Wayne.  If you missed it this year, mark you calendar for the last Saturday in August, 8/25/2012.  You will have a great time! 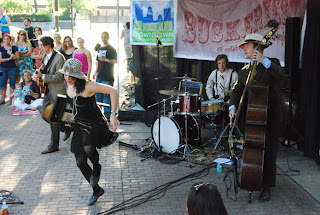 If it is the last Saturday in August, it is time for the last big festival of the summer in downtown Fort Wayne - TASTE OF THE ARTS FORT WAYNE!

If you love the arts in Fort Wayne, if you love all kinds of great food, and if you love music, then this is the festival for you.  There is so much to do and see at this festival it is impossible to cover it all here.   Visit the Taste of the Arts Fort Wayne website to see a list of all the restaurants (approx. 30) and the entertainment schedule for all seven stages.  Use the entertainment schedule to plan your visit to the festival, there is so much to see you will want to be sure to see your favorites or something completely new. 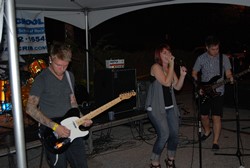 Be sure to stay for Dessert after the Taste of the Arts Fort Wayne.  Dessert will feature four popular area bands playing from 6:00-10:00 P.M. next to the Auer Center, 300 E. Main St.  Check the end of the Entertainment Schedule page to see the list of bands and when they play.
Posted by Blog Administrator at 6:42 PM 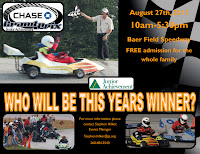 Participants will compete in races throughout the day including various Heat Races that lead up to the Peter’s Body Shop Main Event, where the winner will receive the Scott Brayton Memorial Trophy.

Other competitions during the day will include a Tire Change Competition and, for the first time, a Go-Kart Drag Race.  Throughout the day, teams can win awards for best looking go kart, best dressed pit crew, and best cold pit theme.  Awards are also given to the overall points winner, rookie of the year, and sportsman of the year.

Spectators are welcome to visit the teams in the cold pit area or watch the race unfold from the bleachers. There will also be activities for children including Sweetcakes Entertainment between 1pm and 5pm.

New entries and sponsors to the race are encouraged to get involved. Participants and sponsors receive a variety of advertisements during the event.

JA is rapidly growing and will reach nearly 100,000 students in 25 different counties this year. These students learn financial literacy, entrepreneurship and work readiness. The Grand Prix supports JA and their efforts to reach students of the Northern Indiana area.