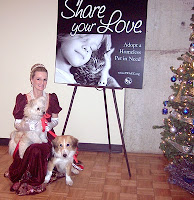 Partnering for the first time last year with Fort Wayne Animal Care & Control, Fort Wayne Ballet seamlessly incorporated adoption-eligible dogs in the Act I Party Scene, providing space in the lobby for FWACC to allow visits with the canine stars during intermission. Families interested in adoption could begin the process right there, but people were also encouraged to visit the wide array of other adoptable pets at the shelter located on Hillegas Road. Allison Miller, Adoption Supervisor of FWACC, reported increased foot traffic in the wake of The Nutcracker, and, most happily, all 14 of the dogs featured during the 2010 run of The Nutcracker found new homes in time for the holidays.

This year Karen Gibbons-Brown, Executive/Artistic Director of Fort Wayne Ballet, began contacting other ballet companies throughout the country in an effort to expand the project nationally, a project she hopes to continue in the years to come. To date, six other companies have committed to adding “Muttcrackers” to their own productions. Beyond the opportunity to better serve and partner with the Fort Wayne community, such additions offer new ways to interpret and experience a classic piece.

“We are pleased and honored to be such an integral part of our community’s holiday tradition,” says Ms. Gibbons-Brown. “As the story stays the same, we have always added some things to keep our production fresh. This year’s production will not disappoint!”
Posted by Blog Administrator at 8:06 PM